Bhoomi pooja in Kerala: A Guide To Bhoomi Puja For Homeowners 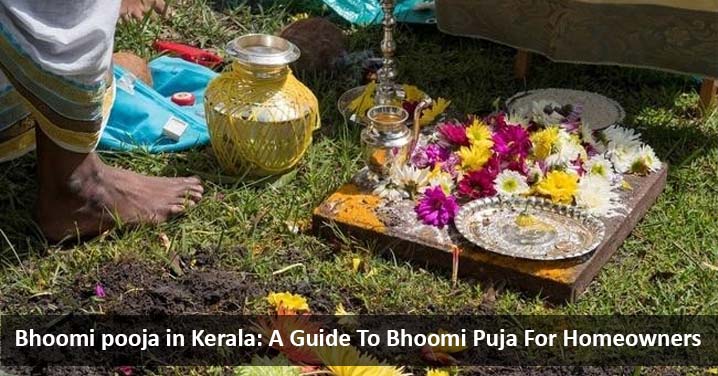 Bhoomi pooja in Kerala: A Guide To Bhoomi Puja For Homeowners

The term Bhumi is derived from the Sanskrit word Phumi- the real name of Goddess. Bhumi is also known as Bhudevi, Vasundhara, Hindu goddess, the personification of Earth. She is the wife of lord Vishnu. Bhumidevi, is seated on a platform that rests on the back of four elephants, which represents four cardinal directions. There are two portrayals of Bhudevi. One with four arms holding a pomegranate water vessel, a bowl of healing herbs and vegetables respectively. She is sometimes portrayed with two hands, the right hand holding a blue lotus known as Kumuda, the night lotus, and the left hand may indicate Bhumi means Mother Earth. People believed that the pose of Abhayamudra, the fearlessness, or the Lohastamudra. Performing Bhoomi pooja will destroy all the ill effects and Vastu doshas in the land and helps for a smooth construction. Bhoomi Pooja will be performed all across India, in metro cities like New Delhi, and Mumbai to Flats in Thrissur, Cochin, and so on.

Bhoomi pooja should take place in the northeast corner of the plot.

Important factors to remember after buying land or Bhoomi

Who should perform Bhoomi Pooja?

Bhoomi Pooja is done by the head of the family along with the wife. The priest will disclose all the details including Subh muhurat which will help you to proceed with the pooja in the right manner.

Benefits of doing a Bhoomi Pooja:

Vaastu Purusha is the God of the construction of buildings. There was a story behind the birth of Vaastu Purusha. According to Hindu mythology, there was a war between a demon and Lord Shiva. During the fight, sweat drops fell from Shiv’s body and it is believed that from the sweat Vaastu Purusha was born. Vaastu pooja is done to please Vaastu purusha. Vastu Purush was chaotic and hungry most of the time.

The legend of Vaastu purusha

Due to this nature, other gods are scared that he will demolish the whole universe. Hence all the gods with the help of Lord Brahma approached Vastu Purusha in doing so. So Lord Brahma called on the gods of eight directions to come and help him to stop Vastu Purush. All the gods came and grabbed Vastu Purush and placed his head in the northeast and legs in the southwest direction. Hence, he asked for Lord Brahma’s forgiveness.

It is better if you understand Vastu principles and create a peaceful space for your life that gives you the right kind of energy.

According to Hinduism, Pancha Bhoota also known as Pancha Maha Bhoota are the five great elements that are the basis of all cosmic reactions. The five elements are:

Earth is the first element among the five. One can touch and smell the earth. It has both magnetical and gravitational qualities too. Earth holds all the living and non-living substances to the solid surface.

On our planet, one-third is water. Water is an important part of every living organism. Eighty percent of the human body consists of water.

Mars and Sun are both planets that are considered to be the lord of the element Fire. The Sun is the source of fire, which gives light to Earth. If there is no Sun, there won’t be light on the earth.

Saturn is the lord of element Air. Touch and feel are the important elements of air. Without air, no living organism can survive. Oxygen which is in the air is essential for breathing.

Jupiter is the lord of the element space. In Vaastu shastra, sky is considered to be the free space of the universe. Earth will be able to receive light, gravity, heat only when the activities in the space takes place.

When to perform bhoomi pooja?

Performing bhoomi pooja in the months of Shravan, Karthik and Margashirsha is very ideal. Monday and Thursday are believed to be very auspicious for these pooja. Also, read more about low budget single floor house design.

What to avoid in Bhoomi Pooja?

It is better if we avoid pooja in the days of Saturdays, Sundays and Tuesdays. It is also better to avoid Hadpaksha, Shraadpaksha for such auspicious poojas. Fourth, Ninth and Fourteenth ? is not good for this pooja. It is always better to avoid the construction, if a female in your house is seven months pregnant.

How to perform Bhoomi pooja?

Here is how to perform Bhoomi pooja:

Other requirements for this pooja are one set of Navaratnas (9 types of gems), a packet of dry dates, five green limes, a set of Pancha lohas, two packets of Navadhanyam, a plate, and a Kalash.

Stages related to the construction of site

As per the mythology, home-related muhurtas are divided into the following steps:

After the pooja, Nivedya is distributed to all people. Also, read more about how to celebrate vishu at home.

Once the construction is completed, housewarming or   grahapravesh is celebrated. For Graha Pravesh, the priest will give information about the sub muhurta. On that auspicious day, home will be decorated with flowers and Rangolis. A coconut will be broken, female of the family member will enter in to the house with Diya and milk will be boiled and at last, sweet will be distributed as prasadam.

Hi-Life Builders is one of the best builders in Thrissur. Apart from building wonderful homes, our portfolio includes home care, resale, and home loan assistance and you will be happy to know that we have a dedicated team for after-sales service and property management service. For further information on our project contact us now!

Our business is currently under the process of rebuilding the website with due adherence to the Real Estate Regulation & Development Act 2016, and the subsequent RERA rules that came into effect from January 1, 2020.

All information published on the website is meant for general purposes only, and the customers should ensure that they make independent evaluations, with diligence, and make sure that the contents are accurate to the maximum extent. However, the interested parties must depend on the sale & construction agreement of the buyers, being comprehensive documents, that incorporate all the necessary terms and conditions applicable between both parties.

The property or apartment related visuals- models, photographs, drawings, illustrations, and artistic renderings, denote only the artistic impressions. The data contained herein like the features, fittings, finishes, floor size and color, and other visual displays are meant truly for general guidance alone and are subject to change. Our business has not authorized any entity or individual to make promises or assurance orally on our behalf to fulfill the specifications of the villas and apartments in question. The business plans and specifications specified in buyer-seller agreements behold the final decision and can supersede the information/content herein.

To get detailed information or to know further about our projects, feel free to talk to us at 999 599 0000 or visit our office during working hours, to get prompt services from our sales team.